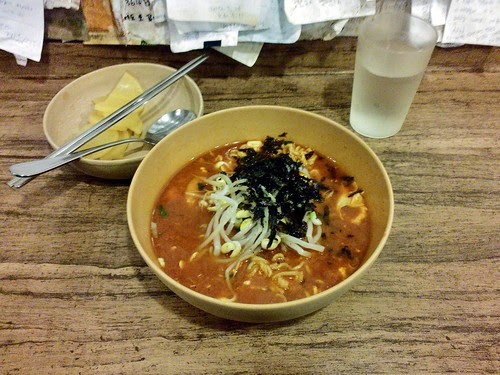 At first glance, one might find this place rather puzzling. Why go to a restaurant to pay these guys to basically open up packs of instant noodles and cook them for you? Well, on one hand, she garnished these things with a few fresh items that clearly wouldn't come in a packet. But much more importantly, these noodles packed a punch that I'd never gotten from a pack of instant noodles before.

See, common instant noodles from Korean brands like Nong Shim Shin, etc. are usually bright red in appearance, but are really more salty than they are spicy. This one, on the other hand, was blazingly hot. Part of it was because of a load of black pepper that I saw her sprinkle in, but part of it was also just the sheer heat of whatever seasoning packet that they used in this thing. Even the non-spicy version that they offered was pretty darned spicy thanks to that black pepper.

We loved this stuff so much that we immediately went to two supermarkets to try to find this stuff to bring home, but alas, none could be found. Maybe that's why these guys have expanded to so many other locations in the country - and if I read it correctly, they only started making the instant noodles afterwards. I hope I can find some soon.
Digested at 8:04 PM
Share

Please note that comments are being moderated in an effort to contain spam, so it may take some time before your comment is published.